Have you ever had a win on the scratch cards and felt like you’re the luckiest person alive? The answer is probably no, but imagine how lucky you would feel if you had FOUR wins which totalled around £13 Million…

This is exactly what happened to a lady in the US called Joan Ginther. This woman started out by winning $5.4 Million, which must have set her up pretty well, but then ten years later she scooped another $2 Million win. 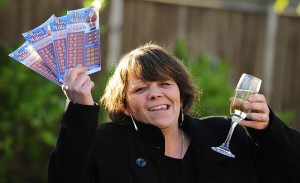 As if this wasn’t good enough, two years after this she went on to rake in another $3 million! The icing was well and truly put on the cake in the summer of 2010 when she hit a $10 Million jackpot!

Now how lucky is that? Well we can tell you, the odds of this happening are said to be 1 in 18 septillion, it’s also said that luck like this would only be likely to occur once every quadrillion years. These are all totally incomprehensible numbers.

How about this is too lucky to be luck? What if this is actually some form of cheating? A professor of ‘Gambling and Commercial Gaming’ from the University of Navada says, ‘When something this unlikely happens in a casino, you arrest them and ask questions later’, this quote says a lot.

There are said to be numerous ways in which the system behind the scratchcards can make it possible to determine with accuracy where the winning cards will be placed.

Behind the sort of system that generates scratchcards there will be an algorithm which determines how many winning tickets to print and on which print out of cards to place them. Now if you can work that out, and you have knowledge of where the tickets in question are going to be shipped, you could be onto a winner, literally.

Determining the location of a winning card would probably more difficult on an online scratchcard, of course, if you fancy your chances you can spin the wheel for up to 500 slot spins at this site which offers bingo games and slots. We suggest you don’t though, as you’ll probably lose.

The likelihood of this winner using some sort of system to cheat seems to increase somewhat when one finds out she actually holds a PHD in Statistics from the University of Stamford. The fact she has also left her home state and moved to Vegas may also point towards her running some sort of scam and wishing to leave her past behind, or perhaps she has something greater planned in Vegas?

Ginther is also reported to have been in cahoots with the store owner back in her home town where she had her first three wins, with this kind of access to the cards it would have been possible to count tickets and study them carefully, whether this alone would secure a win, we don’t know.

Scratchcards are not the only gambling game that can be unravelled and predicted. Take Blackjack for example, this game can be manipulated to some extent by counting cards, if a player has a great mental capacity they can remember when a series of low value cards have been called and determine when it is likely that a high value card will be revealed.

Whatever you think about the situation with Ginther, the locals in her hometown love her as she reportedly hands out unused scratch cards to share her luck! It is believed that these people think that her winnings are thanks to some sort of religious arrangement, until the authorities have proof, this reason is probably as plausible as any.